A ring of history 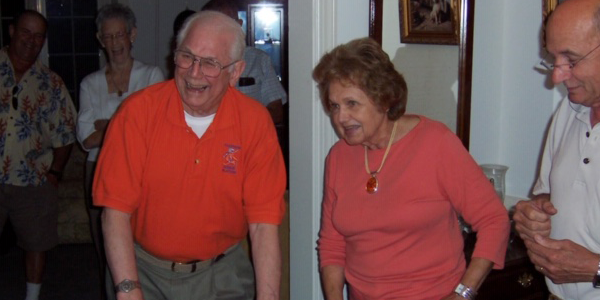 The Clemson ring brings Tigers together in extraordinary ways, but it also represents a piece of every Clemson family's history.

It was a daunting task – packing up her mother's belongings. But her mother was getting older, and it was necessary so they could live closer to one another. When Ann Barrar opened one kitchen drawer to pack its contents, she never expected to find a piece of history. Wrapped in a tissue, she found her grandfather's 1923 Clemson ring. Unfortunately, Ann's grandfather, Hughey Allen Woodle, Sr., passed away when she was a young girl, and she doesn't have many memories of him. But she's always known that he passed down his love of Clemson to her father, Hughey Allen Woodle, Jr.

"I went to Clemson." That is what the Clemson rings signifies. It bonds Clemson Tigers far beyond the four years spent on campus. It bonds us together for a lifetime. And both Ann's father and grandfather were proud to say they were Clemson Tigers.

The Clemson ring brings Tigers together in extraordinary ways, but it also represents a piece of every Clemson family's history. Clemson has always been a big part of Ann's life because of her father's and grandfather's connections, and their rings represent this special bond. Not long before her father passed away, he misplaced his own Clemson ring. But after finding her grandfather's ring all these years later, Ann is hopeful that she will one day find her father's Clemson ring.

Ann's father Hugh graduated from Clemson in 1951 with a degree in chemical engineering. Following his service in the Army, he earned master's and doctoral degrees in chemical engineering at Virginia Tech. After a 36-year career in the manufacturing of innovative fibers and packaging film products, Hugh retired from what is now known as DuPont deNemours, Inc.

Hugh passed away in 2019. It was a bittersweet day – it was the day Clemson defeated Alabama and won the National Championship for the third time in program history. Ann says, "Daddy had a front row seat."

Ann says her father was known as a "true southern gentleman," – something she's certain his time at Clemson instilled in him. Hugh was involved with his alma mater in many ways, especially philanthropically. As the fundraising chair, he helped raise more than $590,000 for the Military Heritage Plaza and $31,000 for the Clemson Corps ROTC Scholarship program. Hugh was instrumental in the planning and design phases for the plaza. During the groundbreaking service, Hugh, Ann and Ann's son Philip were in attendance. Philip had the honor of brandishing his great-grandfather's saber – which he used while a student at Clemson – to mark an "X" in the ground where the plaza now sits.

Ann says that her father always looked forward to the letters he would receive from the scholarship recipients. She says, "They always meant so much to him."

Hugh's dedication to his alma mater was acknowledged through the Distinguished Service Award, the highest honor that the Association can bestow upon an alumnus or alumna. The Distinguished Service Award is based on three main criteria – dedication and service to Clemson University; personal and professional accomplishments; and devotion to their community and public service – all of which Hugh firmly represented.

The groundbreaking ceremony for the Military Heritage Plaza was nearly 20 years ago, and unfortunately, Ann hasn't visited the Clemson campus since that monumental event. But she is hopeful that her work travels within the banking industry will bring her back this year. And while the campus is widely different than it was 20 years ago – or even three years ago – one thing always remains the same. It's the people – the Clemson Family that makes our University so special. It's the shared love of a place that we call "home" – even when we may be hundreds or thousands of miles away. And no matter how much time has passed, when Ann returns, the Clemson Family will be there to welcome her "home."