A Labor of Love 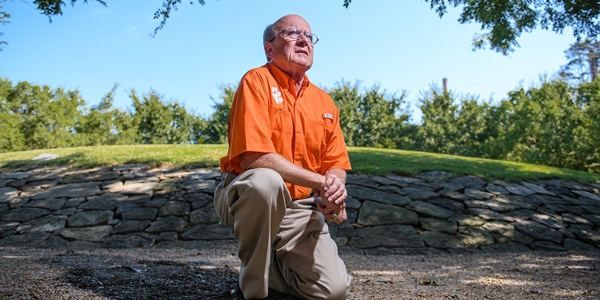 There are 493 names etched on the stones that make up Clemson University's Scroll of Honor - a memorial to the university's students who died while fighting for their country.

And David Lyle knows the stories of all 493 soldiers.

He has researched and verified each one as a former Clemson University student and hero who died in service to our country. He's spent hundreds of hours - of his own time - on ancestry websites, filing through paper records and driving to cemeteries to complete the work.

He enrolled at Clemson in 1963, when it was still required for students to join the university's ROTC program when they came in. To this day, he still laughs when he explains how he ended up as a student in Clemson's Air Force ROTC program instead of the Army.

As he was standing in line to register for Army ROTC, one of the Air Force officers mentioned that the Army cadets' weekly drills included carrying a 9-pound rifle.

"I asked them, 'Can I still sign up for the Air Force,'" Lyle said, laughing at the memory. "That was the best decision I ever made, before marrying my wife, Judy."

It was not the last time that chance - or fate perhaps - took his life in a different direction than he planned. Originally a microbiology major in his undergraduate studies, Lyle had not intended on spending a career in the military. But life doesn't always end up the way we plan.

He spent seven years - in undergraduate and graduate classes - at Clemson University. In 1968, he graduated with his bachelor's degree, and in 1970, he went into the U.S. Air Force, swapping a lab coat for a uniform.

"Our goal was to keep Russian bombers from flying over Canada and getting into the United States," Lyle said. "We were 100 percent successful in that mission."

In the Air Force, Lyle was deployed to bases from as close as Montana to as far away as South Korea. It was a move to Syracuse, New York, however, that prompted him to leave the military life for a while and enter the civilian work force.

He moved back south and spent some time working at the Anderson Memorial Hospital as a medical technologist and later as a middle school science teacher before he and his first wife moved to Hawaii for her turn in a military career.

This time, instead of going to back into the U.S. Air Force, he went into the U.S. Navy Reserves as an intelligence officer. And he was able to get a civil service job as a medical technologist at Tripler Army Medical Center.

He landed a role in a lab - finally.

He then worked at Army hospitals in California, Washington, D.C. and Augusta, Ga. Eventually, that work brought him south - again.

In 1999, he retired from the U.S. Navy Reserves. He began working for the Food and Drug Administration and the Centers for Disease Control and Prevention (CDC). At the CDC, he wrote the protocols for testing for agents of bio-terrorism.

Even now, he is still amazed at the winding journey of his life.

But to him, his love for Clemson and his time spent in the university's Air Force ROTC is what has held it all together.

Even before he retired, he and wife, Judy, were involved with a Clemson University alumni group in Washington, D.C. And since moving back to Walhalla, where a Clemson Tiger flag waves visitors up the front walk, he and Judy have given of their time and treasures to the university that he loves so dearly. The Lyles have recently chosen to make a future commitment to support the Class of 1968 ROTC Endowment that provides scholarships to Clemson Corps cadets.

When asked why he chose to give back to Clemson, Lyle's answer is simple, "Clemson is family." He adds, "Giving back through your estate is a no-brainer."

By giving toward the Class of 1968 Endowment, Lyle is among the Clemson supporters who are ensuring that Clemson men and women will receive a world-class education while also remaining ready to contribute and serve our nation - both of which have significantly shaped Dave Lyle's life and career. Lyle says, "I think Clemson students - ROTC students - would be able to use this to be able to continue to go to Clemson."

Every time he meets new ROTC students at Clemson, Lyle is amazed at their dedication to the university and to their country. Lyle is thankful to be part of the thriving ROTC program and the future of the university.