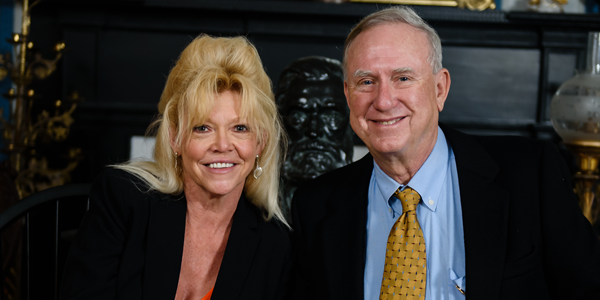 What motivates someone to be philanthropic differs with each individual. However, Clemson donors often share a similar, simplistic motivation; they give back to the place that has given them so much - personally and academically. Our donors - like Paul Barnett '80 - are passing down Clemson's tradition of philanthropy to future generations of Clemson students.

Barnett recently made a significant commitment in honor of his mother, Bonnie P. Barnett, and his father, Dr. Bob Barnett, former Head of Poultry Science and Professor Emeritus at Clemson.

Paul's journey to making this gift started in Clemson, where he and his twin brother, Ron, grew up. His father was a professor at Clemson, and his mother was a musician who started the Barnett Music Center, where she, Paul and Ron taught guitar lessons.

"Back in those days," says Paul, "children could roam Clemson on their bikes or on foot, just playing together. We were part of a great group of friends who were the children of faculty, so we had a strong bond in that regard. Clemson was a small town, and it was a wonderful place in which to grow up."

After high school, Paul and Ron decided to take a few years off before going to college to become "rock musicians". During this time, they played fraternity parties and nightclubs throughout the southeast.

After Paul decided he was more enthused about pursuing a career in aviation, he returned to Clemson where he was accepted into Clemson's Department of Psychology, while Ron went on to play with members of famous bands and singers - such as James Brown, Peabo Bryson and other rhythm and blues artists.

Paul indulged his passion for flying as a member of the Clemson University Aero Club - founded in 1918. He laughs when he recalls how much he enjoyed the annual student organizations day on Bowman Field, where clubs tried to recruit members.

"I may be remembered by my former college friends for being the pilot who landed a Cessna 150 on Bowman Field to get attention for our club," he laughs.

After graduation, he remained in Clemson after being hired as an ROTC pilot instructor. Later, he was a pilot for Eastern Airlines and FedEx - where he worked until his retirement in December 2015.

His life took another turn in 2015 when he married his wife, Janice, a former pharmaceutical representative. Together, they split their time between homes in Fort Myers, Florida and Highlands, North Carolina.

But Paul is anything but "retired" in the traditional sense. He is an avid motorcyclist and makes an annual trip on his motorcycle, travelling between Florida and North Carolina - taking time to visit places like Yellowstone National Park, Denver or Anchorage along the way.

He is a member of the Iron Butt Association, an organization he describes as the world's "toughest (not roughest)" motorcycle club in the country. He was recently recognized with the Saddle Sore 1000 award from that organization - which required him to ride 1,000 miles during a 24-hour period.

Paul's dedication to helping others also includes his service at Fort Myers Youth Academy as a Christian mentor to young incarcerated men ages 13 to 18.

"My desire is to help them through their time in prison and for them to leave being better and more well-equipped to deal with the communities they re-enter," says Paul.

A giving spirit is as much a part of the Barnett's family history as Clemson. Bob and Bonnie are an amazing example of people - like their son - who continue to give back to their community and causes they are passionate about. Even in their 90s, they play in a band, Bonnie Barnett and the Stone Mountaineers, which plays at retirement homes and other venues in the Stone Mountain area where they live in an assisted living center.

"Even after my father retired as Head of Poultry Science, he worked in development to raise money for Clemson," says Paul. "He believed so much in the foundation of Clemson and the impact it could have on students. He also felt that he wanted to help provide educational opportunities for individuals who might not otherwise attend college. I feel the same way and want to honor my parents by making this gift."

Paul explains that he is directing his gift to the College of Agriculture, Forestry and Life Sciences. Because, like his father, he realizes good nutrition is the basis of life.

Paul says he feels strongly that Clemson helped raise him to be the man he is today. "Food is what feeds us…and we must feed the world. Clemson has been in the fabric of my life since I was a baby," says Paul. "Clemson employed my father, gave me a great education and my first job that allowed me to build a successful life. I want this scholarship to honor my parents and to help deserving young people fulfill their dreams as well."

To explore the many ways that you can leave your mark at Clemson, visit clemson.edu/giving.