Martha Grigsby Honors Those Who Changed The Course Of Her Life 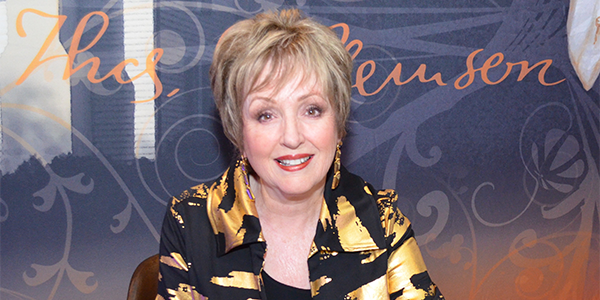 Martha Callahan Grigsby is always on the move. Her lifelong curiosity is expressed through her many interests and involvements - from being a patron of the arts to helping people who grew up like she did obtain a college education.

Raised by her mother who worked in a textile mill in Piedmont, South Carolina, Martha knows the challenges many first-generation students face as they try to find funds to attend college and better their lives.

Martha was a good student in high school, and her teachers, especially her history teacher, Parniece Brown Allen, recognized her abilities and wanted to see her reach her full potential. Allen knew she had to find a way to get Martha to college.

"Mrs. Allen pulled me aside my senior year to ask what I planned to do after graduation," said Martha. "She knew I didn't have the money for college but told me she had an application for Winthrop College on her desk and instructed me to complete it. I started to make a fuss, but one look from Mrs. Allen, and I did what she asked. Mrs. Allen mailed my application and the following Saturday I took the South Carolina Entrance Exam at Clemson (there were no SAT tests in South Carolina at that time). When I received my acceptance letter from Winthrop I told Mrs. Allen I didn't have the money to go, but she told me, 'If I can get you there, Winthrop will keep you.'"

Martha was still concerned about money until again Mrs. Allen stepped in. "One day Mrs. Allen and the pastor of our church came to my house and handed me an envelope filled with the money I needed to pay for everything for one semester," said Martha. Martha recounted this story during the eulogy she delivered at Mrs. Allen's funeral in 2014. "Mrs. Allen literally strong-armed our entire church congregation to get me to college," said Martha with a smile. "She had more faith in me than I think I had in myself. What I know is that it is not so rare to meet people whoinfluence your life, but very rare to meet those who change your life. Mrs. Allen changed mine forever."

Another strong influence in her life was Jean Richard Roddey, who was her supervisor and mentor throughout her days at Winthrop. Roddey helped Martha get the coveted Dining Room Scholarship that paid for tuition, room and board - everything Martha needed to stay in school.

"Mrs. Roddey also hired me to work in her office," said Martha. "She was a shepherd to the girls like me who worked in the dining room. She was such a strong advocate for those of us who needed financial help."

Martha graduated from Winthrop with a B.A. in spanish in 1963. She pursued graduate study at the Monterrey Technical Institute in Mexico and later the University of South Carolina where she graduated in 1976 with a master's in higher education administration/student personnel services.

Prior to obtaining her master's, Martha taught for almost 10 years in the public schools in Laurens, Greenville, Atlanta and Durham. In the mid-1980s she accepted a position with Midlands Technical College in Columbia and served in numerous positions including director of student life, director of community relations and vice-president of development. It was at Midlands Technical College that she met and married Robert L. Grigsby who served as president of the college for 20 years.

Robert Grigsby was a Clemson graduate who earned a degree in vocational agriculture in 1947. Martha described her late husband as a very humble man who loved Clemson and education.

The couple enjoyed attending football games and other events at Clemson. They lived in Seneca for 20 years before moving to Clemson Downs in 2002. Robert passed away in 2007. Martha continues to be involved with her passion for education through need-based scholarships. Inducted into the Legacy Society in 2015, Martha has created a bequest to Clemson. In her estate plan, she created The Parniece Brown Allen Memorial Endowment for Clemson's First-generation program in honor of the teacher that helped change her future.

Today, she and close friend Dr. Philip Prince, who served as president of Clemson University from 1994 to 1995, remain heavily involved in life at Clemson. Martha has served on the board of directors for the Brooks Center for Performing Arts and the Center for Visual Arts.

"Philip has helped me understand the operational side of Clemson and I'm more aware of how Clemson is being shaped and the needs of students," said Martha. Prince is a close friend of former President Barker who, like Martha, is a first-generation graduate and a strong advocate of need-based scholarships.

Martha credits President Emeritus Barker with raising her awareness of the stress and challenges students with financial hardships continue to face despite student loans and other financial assistance. "Student loan programs don't solve all the problems of staying in school because these students are often stressed by juggling part-time jobs and academic studies - causing many to drop out before they graduate.

"I was lucky that I had a very special teacher and a mentor who took it upon herself to find me the money to go to school and stay in school," said Martha. "That jumpstart is the foundation upon which I was able to become a teacher, an administrator and so much more. I want every high school senior who wants to go to college to realize their dreams just like I did."

Martha says a quote by author Ivey Baker Priest is a touchstone:

"The world is round and the place which may seem like the end may also be only the beginning."

Martha knows that without the help of her teachers and others who supported her desire to go to college, her life would not have moved forward in the way she wanted. Martha Grigsby wants others to have that same chance.