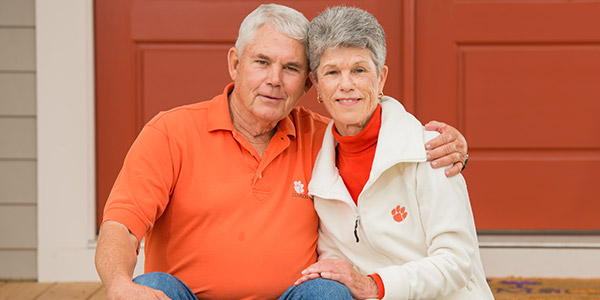 Butch and Joy Ferree describe their lives in Clemson and their involvement with Clemson University as pure joy. To many natives of Clemson, they are icons. You can spot them at almost any Clemson sporting event, or see them grabbing a burger at the Esso Club - just a block away from their home on Strawberry Lane where Butch was raised. You might see Joy walking briskly on the sidewalk on College Avenue wearing her bright orange cap. The Ferrees are an unpretentious couple who love Clemson with deep conviction. As Joy would say, "Clemson is in our blood."

Butch's father graduated from Clemson in 1939 and was on the faculty of Clemson's Horticulture Department and known as the "peach expert," said Butch. Joy's father was a traveling technical salesman with B.F. Goodrich. "I was so fortunate that my father could pick anywhere in the southeast to live, and he chose Clemson" said Joy.

Butch and Joy were raised in Clemson at a time when Joy says you literally knew everyone in town. "You could ride your bike all over town, and you knew almost everyone by name," she said.

Married more than 50 years, Butch and Joy both attended what was Calhoun-Clemson School and graduated from Daniel High School. Although the couple double-dated frequently in high school, it was when Joy's sister, Carol and Butch's brother, Roy, got married that their interest in each other became serious.

"Our mothers arranged for us to drive to Fort Knox in Kentucky where my brother was stationed to visit them, said Butch.

Joy says, "I was smitten by the time we stopped in Asheville for coffee." They eloped seven months later. Butch was a rising senior at Clemson and Joy was a sophomore. Since that time, their lives have been full of interesting people and experiences.

Butch received a B.S. in horticulture in 1965 and a master's in 1967, following in his father's footsteps. "My dad taught me the joy of getting my hands dirty and the importance of understanding soil and what it took to become a successful horticulturist." Butch earned his Ph.D. at Virginia Tech in 1970. Before they were married Joy attended the University of Georgia, but said she was so homesick for Clemson she transferred to Clemson University. In 1963 Joy was crowned "Miss Clemson College" the year before it was renamed Clemson University.

"Growers are real people who get their hands dirty, who work long hours to put food on our tables," said Butch. "You don't find many farmers or people who work growing plants or foods, to have big egos. They are very humble, and I was honored to work with some of the greatest people I'll ever know."

Butch is modest about his contributions to the commercial growing industry, but his peers have recognized him with numerous awards including the title "Mr. Peach" by the Georgia Peach Council. He also received a service award from the South Carolina Peach Council and the Distinguished Achievement in Public Service Medal from the University of Georgia.

Joy said she remembers the day they left Clemson, when she told Butch she would go anywhere with him as long as she knew they could eventually come back home. Butch held true to his promise. They moved back to their hometown in 1998 and now live in the heart of Clemson in Butch's childhood home.

In 2011, the Ferrees established a $1 million gift in the form of a Charitible Remainder Trust. "Giving to Clemson had been part of our lives and plans for a very long time," said Joy, "so giving a more significant gift was a very short discussion."

"Our gift is in part meant to help students get out of the classroom and learn by getting dirt under their nails," said Butch. "Sweating, digging in the dirt and learning what works and what doesn't work is a critical component to helping students truly understand what's involved in their future line of work." Butch adds that he is proud of the many students who started at Clemson in horticulture with very modest means and become personally and professionally successful.

The parents of two daughters and grandparents to four, Butch and Joy are strong advocates to others who they hope will consider giving to Clemson.

You may see the Ferrees enjoying a hamburger at the Esso Club or walking briskly towards Death Valley to check out a football practice or to see how construction is going on a particular campus project. They are remarkable and unassuming people who love their community and everything Clemson.