The Power to Transform 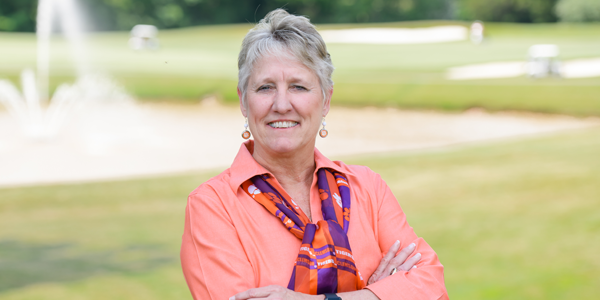 Melinda Chappell has established an endowment at Clemson to reflect her greatest passions in life.

Passion - it's what drives an individual in their success personally and professionally. Melinda E. Chappell's passion for recreational therapy and helping others has played a large role through every aspect of her life, and now she is exemplifying this passion through an endowment to provide unrestricted support for the Clemson University Recreational Therapy (CURT) Program, which is part of the College of Behavioral, Social and Health Sciences.

Melinda's road to creating this endowment was straight and determined. Raised in Columbia, South Carolina, she was the only girl growing up with four brothers, two of whom are also Clemson graduates. Melinda and her four brothers were instilled with a love for athletics from an early age, thanks to their parents, Chris and "Booie" Chappell. They even had a golf green and sand trap in their backyard to prove it!

When Melinda was around nine years old, doctors discovered a bone cyst in her hip that required two surgeries. During her recovery, her entertainment was limited, but she quickly found that she enjoyed swimming as a form of physical therapy. That experience and her passion for Clemson eventually led her to Tiger Town where she majored in recreation and parks administration with an emphasis in therapeutic recreation. Her goal was to utilize both her degree and passion by working with children and teens challenged with physical disabilities.

While at Clemson, Melinda dove into every aspect of collegiate life - from her sorority that she describes as a "diverse group of smart and determined women," to approaching the late Clemson President Bill Atchley's wife, Pat, to help start a women's golf team. Pat Atchley, an avid golfer herself, advised Melinda to start with a collegiate club.

"The first meeting was composed of men and a handful of women," says Melinda, "and we played lots of courses throughout the area. It wasn't competitive, but it was a start." That small start paid off in 2013 when Clemson Women's Golf Team was formed.

Upon graduating, Melinda was able to utilize her degree and her passion in the field by working for a psychiatric hospital as a recreational therapist. She worked with adolescents struggling with various mental and physical issues, using swimming, tennis, bowling and other sports to not only help them restore their self-esteem but to provide direction in all aspects of their lives.

During her career as a recreational therapist, she has also worked tirelessly with nonprofits. While working at the South Carolina Vocational Rehabilitation Muscular Development Center in Columbia, she helped found the nonprofit organization Limitless Sports, a program designed to help people with disabilities complete in sports activities. Melinda was instrumental in bringing the late Christopher Reeve to speak at a major fundraiser for that organization, an accomplishment of which she is very proud.

Melinda was tapped to be the director of the North Myrtle Beach Aquatic and Fitness Center before it was even built - a position she still holds today. Now a resident of North Myrtle Beach, she started another local nonprofit, Coastal Adaptive Sports. She was recently involved with a fundraiser for yet another nonprofit in North Myrtle Beach, Teen Angels - an organization aimed at helping homeless and otherwise struggling teens achieve successful educational experiences through the use of community resources.

Melinda was also a founding member of the Southeastern Wheelchair Sports Association, a nonprofit hosting regional athletic competition for persons with disabilities. As an active alumna, Melinda knew of Clemson's commitment to adaptive sports, and she was instrumental in moving the games inland to make it more accessible for attendees from places such as Atlanta and Charlotte. During its 25th annual games last month in Clemson, after 24 years of being hosted in Myrtle Beach, the Southeastern Regional Wheelchair Games welcomed 15 participants to the Clemson campus. Volunteers included students from Clemson's PRTM program and several Clemson football players. Two Clemson students, Marsden Miller and Scarlett Lawhorne, participated in the games.

Melinda believes the sky is the limit when it comes to philanthropic endeavors and generosity, a mentality that led her to Tiger Town once again as she began considering ways to leave a legacy that reflected both her passion for helping others through sports and her love of Clemson.

That's when she began working with the Clemson University Foundation to create the Melinda E. Chappell '82 Endowment for Recreational Therapy to provide unrestricted support for the CURT Program - or its successor. When funds are reached to endow this program, a second endowment, the Melinda E. Chappell '82 Golf Endowment, will be directed to the Clemson Women's Golf Team.

"I want to help students who want to utilize their desire to go into recreational therapy to achieve their dreams, live their passion and help others in the process. God has worked in my life to do this, and I feel blessed to be able to create a legacy that will help deserving people," Melinda says. "I feel so strongly that Thomas and Anna Clemson are a testament we should live by and that through planned giving, no matter the size of the resources we have, each of us can be a transformative power in people's lives."

To learn how you can make your own gift to Clemson, visit www.clemson.edu/giving.